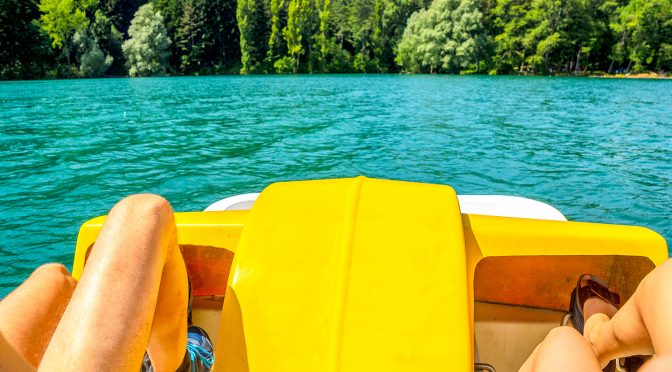 I tried to talk my parents into buying me a paddle boat when I was 11. Oh yes, I did.

We used to spend the summer on a little island at the south end of Mobile Bay in Alabama. The first thing my younger brother and I wanted to do when we got there was to go to the concession stand and rent paddle boats. For those of you who are not familiar, they are kind of like riding a bike but on the water, seriously.

The rental was kind of expensive as I remember, but the folks let us ride as many times as we wanted. My idea of buying one to save on the rental just didn’t float with Mom and Dad.

The following year, we discovered the paddle boat concession had been wiped out by a hurricane. We were inconsolable until our Dad presented us with 4 new Frisbees. We got the neighbor kids out on the beach and played for what seemed like hours. When the inevitable boredom set in, we often walked to historic Fort Gaines on the far eastern end of the island. There were lots of walls to climb and ramparts to scramble up. It was like a huge jungle gym. The fort had real cannons too.  Signs discouraged people from climbing on them, but we did it just the same.

After supper, the family often walked to the western end of the island, which was quite a jaunt for our little legs, especially in the sand. By the time we got back to the house, we were ready for a well-deserved night’s sleep.

It took me a while to realize that my parents were geniuses. They knew how to engage their 2 somewhat hyperactive boys and make sure we burned off enough energy to settle down in the evening. Sometimes we volunteered to go to bed early, which gave the folks a much-deserved rest.

When I talk to people who are older and wiser than me, I keep in mind they probably have insights and wisdom far beyond my own. Giving an older friend or family member a chance to share their insights is our chance to learn from someone else’s experience.  My parents might not have been geniuses, but they were most certainly practical and insightful when it came to raising kids.

I recently checked out the cost of a paddle boat, with an awning of course. It was affordable. However, I realized what a wildly impractical purchase it would be, so I bought a Frisbee instead. Lesson learned.

Patrick Harness is a community liaison with a long history of experience in health insurance. He is known for his inability to parallel park, and if you ask him to pick a color, he always chooses orange, (and he paints!)